Welcome to the administrative and political quagmire that police refer to as defensive tactics training. Its no secret that the Invictus Leo movement is trying to get more (all) officers to adopt Jiu Jitsu as their primary defensive control tactic skill. Within Law Enforcement, there is a small group of officers who train Jiu Jitsu and understand its importance for the job. However, this article isn't about the benefits of Jiu Jitsu, its the very real and uphill battle of getting cops to train who don't.

So, why aren't police training in Jiu Jitsu? Why wouldn't they adopt a skill set that not only would make them more effective at their job, but would also protect them and suspects from harm?

The specific excuses that are holding cops back are numerous. Eg: I don't have time. Its too expensive. I don't want to get hurt. Or the biggest and most dangerous one of them all :

"I've never needed Jiu Jitsu as cop and things have always worked out fine for me."

This article isn't a feel good one. It's not designed to sugar coat anything. It's designed to open your eyes to your confirmation bias on why you are not training.

Confirmation Bias occurs from the direct influence of desire on beliefs. When people would like a certain idea or concept to be true, they end up believing it to be true. They are motivated by wishful thinking. This error leads the individual to stop gathering information when the evidence gathered so far confirms the views or prejudices one would like to be true.-Dr. Shahram Heshmat Ph.D 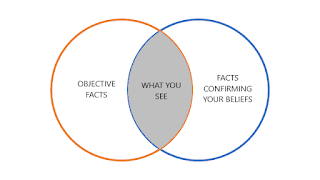 Before becoming a police officer, I earned my degree in philosophy which included logic and how people are constantly using fallacies to back up their claims about the world they live in. Let me tell you, there are more cops using wishful thinking (which is a form of self deception) to give them a false sense of optimism about their skill sets.

The skills officers need today are vast. The majority of interactions with the public are verbal in nature. Cops use their verbal skills to communicate, to de-escalate, to command, to sympathize and to navigate the world they work in. 99% of all police interactions are resolved using verbal skills. However, of the 1% left, the physical realm if you will, is broken up into control tactics, intermediate weapons (less lethal) and firearms (lethal). Of this 1%, 90:% is hands on, arrest and control. However, the amount of actual training police receive in this area is typically less than 8 hours a year. Yes, you read that right-8 hours a year.

The average citizen who is training Jiu Jitsu or MMA as a HOBBY (for example) is training that in one week.  So, an officer who runs into some with training, say with 2 years experience, will have 100 TIMES more training time than the average cop. As such, the officer will likely be unable to use any control tactics will a high rate of success and need to transition to less lethal or lethal weapons to survive the encounter.

Many officers do not train Jiu Jitsu or defensive tactics outside their duties because of confirmation bias. They have glided through their career not needing it. The rely on force presence (uniform), their position of perceived authority (which is diminishing by the way),  strength in numbers  or weapons, or size (strength, age, athleticism) to back up this bias.

The majority of departments have a limited time to get officers certified in the basic defensive tactics laid out by their agencies. But one of the greatest disservices in this training is what is being taught. Many departments are using old and ineffective defensive skills. It is perpetuating a culture of ineffective training. Advances in tactics are constantly being developed. There ARE better ways to teach officers hands on control (Jiu Jitsu) but many departments still rely on ineffective strikes, poor grappling concepts and low percentage pressure points as their bread and butter.

While there are some very forward thinking departments around the world, the majority simply maintain the bare minimum to keep officers trained. Cops can't rely on their departments to pay for everything and keep them at the forefront of training. All the go getters and cops I know who excel at their jobs (no matter what area they are in) and the ones who take the EXTRA time to get better. These are the cops who stay after their shifts end, the ones reading and researching topics on their own time, the ones taking courses and the ones who are training outside the punch clock. These are the best of the best in their respective areas.

If you are on the front lines of policing (patrol), you really should be adding jiu jitsu to your tool box. It will give you confidence. You will absolutely learn how to control another human being. It will help with stress and PTSD. It is fun. It will make you more confident and less likely to rely on your tool belt.

If your confirmation bias includes that you have never needed Jiu Jitsu up until now, let me use another analogy for you. Its like not learning how to swim. Its too late when you find yourself in the deep end and you think "I really should have learned how."

Be proactive in your training. Don't rely on someone else for your betterment. Seek out training and start no matter your experience or age.

Make Jiu Jitsu mandatory. Your survival may depend on it. There are probably a few people in your department training Jiu Jitsu. Seek them out and ask how you can get involved.

How to Deal with Grief in Jiu Jitsu

First, if you searched for this, let me say that I am sorry for your pain. I lost my father March 31, 2019.I helped him palliate in my home. Early in my bereavement I searched this topic and didn’t find the information I was looking for, so I am offering you my experience with anxiety, limited capacity, ego, community,and goals. Grief changes you; you don’t have much choice. Don’t be destroyed;lean in and rise. 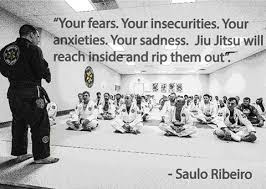 In bereavement I was anxious all the time. Nothing triggered it.It was a monster butterfly flapping in my stomach 24/7. Before my first night back on the mats, I asked a trusted friend for help. I had no idea what would happen-I didn’t know if I would make it through the hour, burst into tears, or pass out. I knew that whatever happened, he had my back. For the next few months,I asked for the support of my trusted people. I managed my anxiety by being very selective about my training partners and my rolling partners. I didn’t roll right away,either. I had to build the capacity for rolling.

The lack of capacity in bereavement was a shock. I had maybe half an hour of concentration and energy before I was unconscious. When I first came back to Jiu Jitsu, had about 30 mins of attention before the familiar, floaty sensation of disassociation set in. Each week, I’d gain about five mins before the feelings of disassociation returned. Because of the lack of capacity, I found that one class a week was enough. Once my capacity reached a full hour without feeling disassociation, I added another class. I managed my capacity by guarding my energy. Having patients with myself during this phase was frustrating.

Some days I was angry at the grief process. I wanted to be “who I was”. Today, I feel gratitude; I feel solidified. The way I approach Jiu Jitsu has also changed: I am softer-not as hard on myself. When I first came back, I told myself my game should be like it was. With the support of my coach, I saw all the should’s for what they were: ego. After seeing ego for what it was, it was easy to drop the story and start cheering for the small accomplishments. Even if I tapped a million times, replacing the should’s and focusing on the small accomplishments gave me something positive to hang on to. I managed my ego by cheer leading myself.

In all of the management strategies I’ve talked about, I’ve received the support of my community. When I first lost my Dad, I questioned everything and fell out of love with most things,including Jiu Jitsu. The only reason I kept going was the people. Few people at my dojo knew what I was going through, but no matter whether they knew or didn’t know,they held space for me. No matter whether they knew or didn’t know, I felt supported. The dojo was (and is) a place of acceptance and connection. Today, it is six months later, my love for the community continues to grow and my love for the game is retuning even though the skills aren’t where I’d like them to be yet. 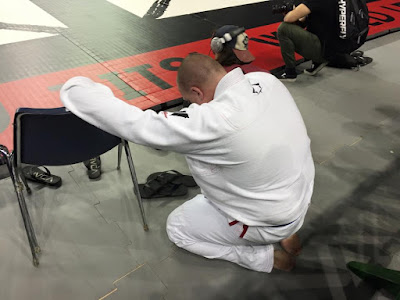 Increasing specific skills has become my new goal. For so long my Dad and his health were my goals. When he died, I became untethered and disengaged. Most days I’m fighting apathy. A teammate and friend who recently complete in the World Masters casually mentioned he’s looking for his next goal. In that moment, I suddenly saw that goals are our anchors. They give us something to be interested in, cultivate attention to living, and provide something to grow into.

Grief forces you to grow. Grief burns away who you thought you were. You are forced to manage anxiety, limited capacity, and ego. Feel the support of your community and set goals to anchor yourself. You have no choice but to be changed by grief, so lean in and rise.